CAR T cells and the future of HIV therapy 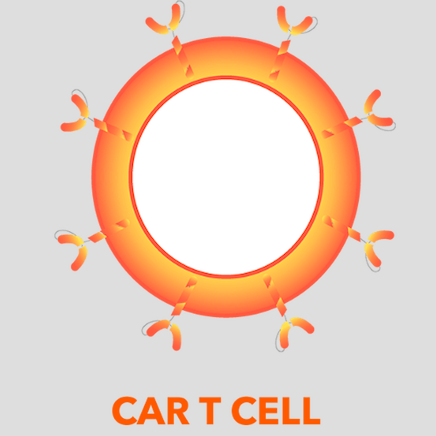 Chimeric antigen receptor (CAR) T cells have been studied for over 25 years and are very successful in some types of cancer. With more than 30 million people living with HIV infection there were great hopes that CAR T cells method can help achieve “cure” but unfortunately after 15 years of clinical trials they have not shown to be effective.

What are CAR T cells?

Chimeric antigen receptor (CAR) T cells are obtained from donor lymphocytes, and then they are genetically modified and transfused back to the donor. They are designed to redirect T cells that express specific cell-surface epitopes which induce Major Histocompatibility Complex (MHC) – independent cytotoxic T lymphocytes response.

When this method was used in relapsed/refractory leukaemia they have achieved 67% 6-month survival rate in comparison to less than 25% with best available chemotherapy. These results raised high hopes for the potential effect of CAR T cells in HIV treatment.

What are the potential advantages of CAR T cells to target HIV-infected cells?

First generation CAR T cells use CD4 cells to target HIV Env-expressing cells. There were 4 clinical trials using this approach and while the CAR T cells were detected at least 10 years and there were no adverse events, the treatment did not achieve statistically significant effect on viral load. This led to discontinuation of further research.

Second generation CAR T cells use CD28 or 4-1BB which are important for lymphocytes activation and persistence. They have proved to be significantly more effective than first generation. This second generation is used in cell cultures and has shown promising results in reducing HIV-infected cells. However there are no in vivo results yet.

There are some positive signs in second generation CAR T cells testing and this is still exciting field to keep up to date with.